An Awesome Weekend with my Aleene's Friend, Lauren 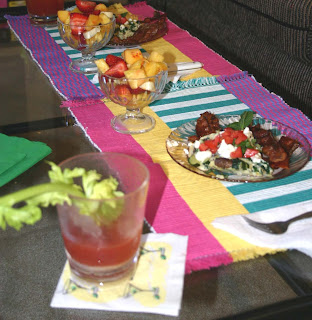 This beautiful spread looks fresh out of a magazine, but no, it was the fabulous food my friend Lauren prepared this weekend. I'm used to cereal and a stop by Starbuck's for a Venti Black Iced Tea on weekdays on my rush to work. So, to sit down to this scrumptious fratatta, Caramelized Bacon (glazed with Canadian Maple Syrup she'd brought back from a recent trip - very yummy, by the way!), fresh fruit and a Bloody Mary was a great gift.
We had a delightful, but short weekend. We crafted, crafted some more and experimented with some products. We caught up on everything since our last trip to San Francisco in May.
Sunday, we lounged around and took the short drive from Lauren's to the ocean where we did a lot of people watching at a concert right on the cliffs overlooking the ocean. It was delightful to relax without a care in the world!
We're already planning our next get together where crafting will reign, I'm sure!
Make it a great week!
Joan

Today was a friend's birthday at work and he recently enjoyed a vacation in Hawaii, so we thought we'd continue his experience. We celebrated with a Hawaiian Breakfast. I got so many compliments on what I made, I thought I'd share it with you. Should have taken a picture, but I was running behind this morning. It's super easy - you make the french toast the night before. Enjoy!

Pour egg mixture into shallow dish. Dip both sides of bread in mixture. Place in buttered pan. Cover and refrigerator 8 hours or overnight. 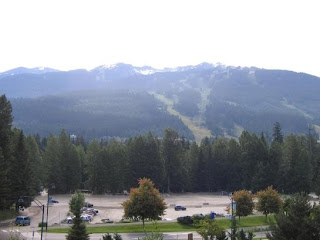 More about my Zipline Trip! 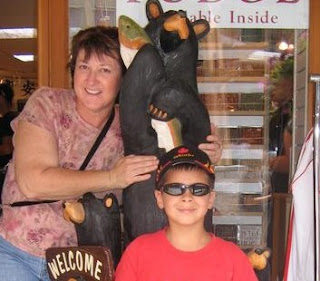 I flew into Vancouver and was met by my bro and family. It was the oddest thing to have it still be light after 10:00 p.m. The next morning we drove north to Whistler - the countryside was absolutely beautiful - I saw the most gigantic waterfall I've ever seen (minus Niagara Falls) and some of the greenest landscape I've seen in ages - just gorgeous!
We had a whole day and a half to meander around Whistler before our big adventure. There was great food, great company, great fresh air and I even got a little (gasp!) Christmas shopping done.
OK, so it was finally time to harness and helmet up and go ZIP! It was so very awesome! I was never afraid for one minute but I certainly thought I would be. The guides attach you to the zipline (it's a metal cable that's only 1" in diameter!) You can see the steps to nowhere in the 'launch pad' picture - you just walk down the steps until you can barely touch one, you lean back and you're 'zippin'. We were hundreds of feet above the ground with a huge raging river below us...we were done all too soon. Now, I'm searching for my next adventure...hmmmm...what will it be?
On the way to the Zipline drop off point, our guide pointed out that what we were driving by was Curve 16 of the bobsled run for the 2010 Olympics - that will be so neat to watch the Olympics on TV and know that I was RIGHT THERE.
Back into civilization, we took an afternoon trip on the ferry over to downtown Vancouver where the Expo was held a few years ago - I had been to the Expo and it was odd to see the white sailed building still there at the waterfront.
The vacation ended by attending my sister-in-laws family reunion (when I heard there was a Zipline where they were going, I invited myself along!). It was so fun to see how other families celebrate - there was a game about Canada's history - since the rest of the family was from the US we had to really tax our brain to figure out the answers (and some we didn't know at all!). The prizes were Canadian items.
What a great trip! 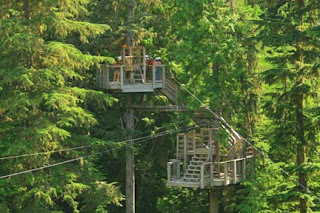 I just have to get caught up with some work projects, but I HAD to show you pictures from my trip to Canada to do the Zipline!!!

More about the trip soooooon! 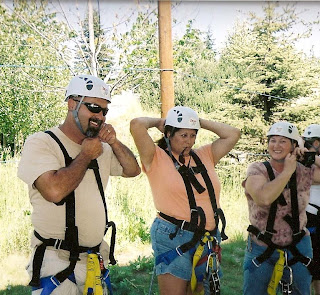 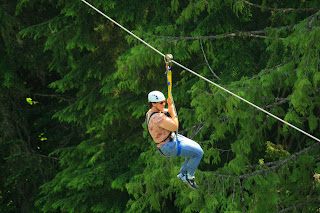 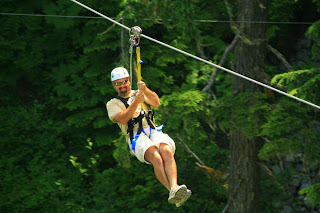 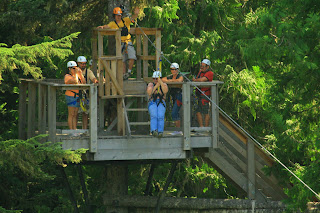 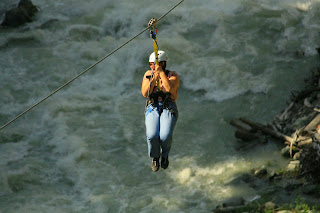 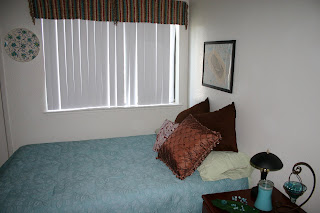 OK, I had company coming two weekends in a row - so I challenged myself to spruce up my guest bedroom on a tight budget.

I already had the Caribbean Blue bedspread and brown and blue pillows, but nothing on the walls and dustbunnies on the bedside table. 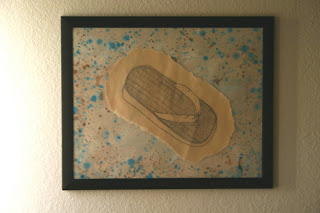 ran across the drawing of a sandal I did a couple years ago when I was 18 and the paper was pretty crumpled. I decided to tear around the edges to remove the torn section. I

knew I wanted to frame it and it needed some color to draw it into the room colors. I brushed water on a piece of Vellum paper and sprinkled on Tulip Soft Fabric Paint that I'd watered down a little. It was fun to watch it spread and have no control over what it did. The white showed through too much, so I watered down the Chocolate paint and did an antiquing wash over the whole sheet. I let it dry and applied the sandal drawing with some Aleene's Original Tacky Glue. It is so much better to have a home for my little sandal instead of in a roll in my closet. 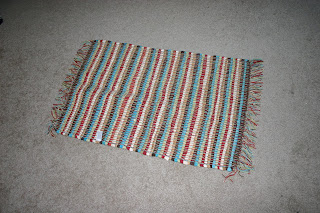 So, the room still needed some pizazz. I found this braided rug for $4 and decided it just needed to be cut in half and used as a 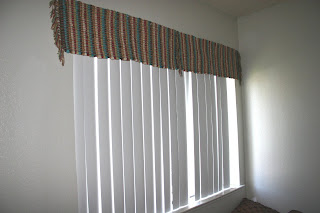 valance over the vertical blinds. I ran a line of Aleene's Fabric Fusion along the cut edges to keep it together. 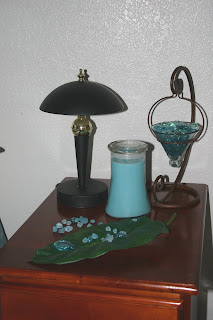 I found the great Caribbean Blue candle, large tropical leaf and glass sprinkles at my local craft store to add a little more color. Later, I added a beautiful picture of the Hawaii coastline to the table.

Perfect! And within my budget too!
Posted by Joan Martin Fee 3 comments:

It was a friends birthday recently and she was talking about needing to buy some new clothes - that sent the creative spark to my brain and I created two fun shirts - I really got into it! I didn't want to stop creating and you'll see from my next post that I went on to make more fun stuff! 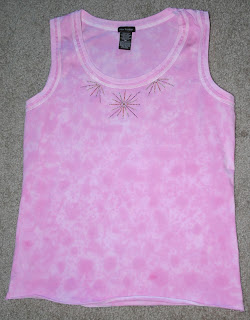 Pretty in Pink and Sparklies 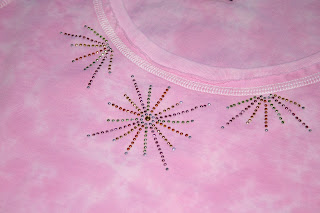 Here's what I did:

I used Fuchsia Tulip One-Step Fashion Dye. For easy clean-up, I put a plastic garbage bag in my shower, placed my crumpled up T-shirt on the bag, 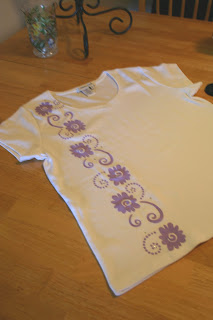 added water to the dye bottle, applied it and just let it sit. Later, I ironed on the Tulip Iron-On Fashion Designs - I had so much fun!

On the lavender T-shirt, I used the brand new Tulip Sticky Fabric Stencils - the adhesive is already on the back, so I just placed it on the T-shirt, dabbed in some Tulip Soft Fabric Paint but then it needed just a little something more so I added Tulip Iron-On Crystals. Again, it was a fast, easy project!

Now, to wrap and pack up the creations! I can't wait to hear how she likes them!
Posted by Joan Martin Fee No comments: 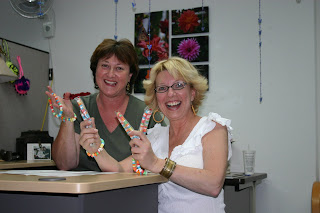 Candy, candy, everywhere there was candy!

I just had the most delightful weekend! I even got a little work done in there, but the highlight was DEFINITELY having my long time friend Pattiewack here!!! She and Scott were here to tape a ceramic video. Pattie wasn't in front of the camera this time, she was here to help out behind the scenes.

Pattie's working on a project and decided to craft faux cakes and cupcakes (I talked her into cupcakes after seeing so many in San Francisco recently) decorated with CANDY! 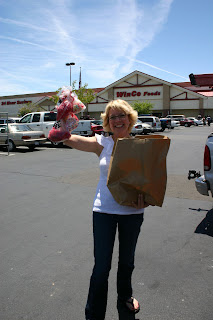 Here's how the weekend progressed...Pattie and Scott whirled into town (I really mean - whirled - Pattie comes with her awesome energy that radiates wherever she goes!) I knew they were coming for business and that being able to see them for even a short period of time would be terrific. 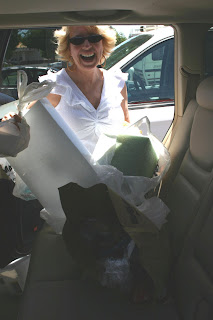 Things worked out for us to go to dinner and we had the most delightful food - tapas - I'd never been to the restaurant but heard it was excellent. Water was served in these huge bubble shaped glasses and I found out tapas are samplings of different types of food. We're all dessert lovers so flan and a chocolate espresso cake rounded off our experience. Unfortunately, it was an early evening and I thought my Pattie fix was done for the weekend.

I worked most of the day Saturday (we're getting ready for the big trade show in Chicago this month!), but Pattie kept coming by and saying 'hi!' They had plans for dinner, so I wasn't sure if I'd see them again before they left.

I called Pattie on Sunday morning to see how their taping was going. And told her about this grocery store nearby that had bins and bins of candy, etc. that would be great for her project. She decided to escape with me and we giggled and giggled and giggled some more looking at all the candy at the store - a guy even came up to us and said "you two are like a couple kids in a candy store!" Wherever Pattie and I go it's an adventure. We decided to catch lunch and sat outside and chatted for quite a while - it's never long enough in my book. We talked about our pasts and our futures - there was even a pinkie swear in there too.

Now, back to cleaning my place - another Aleene's friend is coming next weekend and I have to get ready! If you were an Aleene's fan you wouldn't know Sharon's name or her face - she was a terrific behind the scenes person - when I became the editor of the magazine, Sharon became the instructions and features editor. I am working with her again and it's great fun to catch up. Next weekend, more fun stories!

Make it a fantastic week!