I am soooo looking forward to the weekend. So much happening, so many new and fun things to try! Line dancing class today (we'll see if I actually make it to this), shopping for a BIG party tomorrow night (clothes and a gift for someone I've never met), Music in the Plaza at the local mission tonight, the BIG party tomorrow night, a meet and greet for OLLI tomorrow - it's a fantastic program at the local university - unusual classes to anticipate over the next few months, Sunday a bbq with friends I haven't seen in months on their ranch and somewhere in there, I need to work on my book. Ahhhh, life is full!!!

I'm heading out to my first camera club meeting tonight - after having a fabulous Canon Rebel for five years, I'm FINALLY going to figure it out! (I hope)
Posted by Joan Martin Fee 2 comments:

One of my friends arranged for eight of us to go to The Great American Melodrama & Vaudeville in Oceano tonight to see Gold Fever at the Rough and Ready. It was a evening of hot dogs, sawdust on the floor, singing, hissing and booing the villain and good old fashioned fun. After two hours and the main feature was over, they announced it was time for the vaudeville and I have to admit I was rather disappointed because it had already been a long day. I laughed so much and so hard! It was a fabulous way to end the evening. It was nice to catch up with friends on the way down and back home.

Tomorrow night, a bunch of us are going to see Julie & Julia and then dinner. Can't wait! 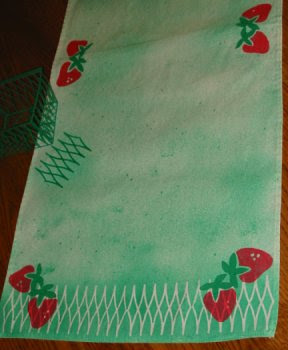 I LOVE strawberries and never knew what to do with the empty baskets - I got the idea to cut them apart and make a stencil for a creative table runner! 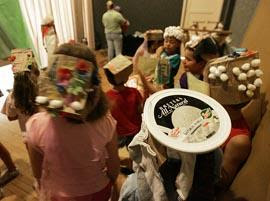 I read my hometown newspaper on-line every day and was delighted to see the crafty article From Garbage to Garb.
From garbage to garb
By Heather Halseymailto:Halseyhhalsey@HanfordSentinel.com
The old adage, one man's trash is another man's treasure, couldn't have rung more true than it did on July 23, when children in the Lemoore Summer Day Camp strutted down a runway wearing just that -- trash. Egg cartons, old socks and soda can tabs all made their way into the creations of the kindergarten through sixth-grade campers who worked for three weeks to design and construct the costumes before they hit the runway at the Lemoore Civic Auditorium.
The Lemoore Parks and Recreation Department's camp directors have been teaching their campers about "going green" since June 15 and all of the items used during the fashion show were things they'd collected to recycle or repurpose. "We wanted to have a 'Project Runway'-type fashion show but with the green theme," said assistant camp director Mallory Spoelstra.
The kindergarten through second-grade campers took the runway first to show off their carefully created hats that were decorated with everything from cotton balls to feathers.
Children at the Lemoore Summer Day Camp's fashion show wear hats made of recycled material.
"Every day at camp the campers receive breakfast and lunch in brown paper bags; they cut those bags and added a variety of recycled materials to the outside," said Spoelstra who served as the MC for the event. The fourth-through sixth-graders then hit the catwalk wearing everything from baseball uniforms to prom dresses. Fifth-grader Celine Davis of Lemoore wore a wedding dress that she had made with the help of fourth-grader Ashleigh Austin. They used white tissue paper to make the dress and white material to make the veil. Dustin Allen showed off a baseball jersey that he and Phillip Arterberry made out of used scarves. They even used straws to write "Allen" on the back.
Several parents attended the fashion show, including Natalie Piper of Lemoore, who came to see her 9-year-old daughter, Nora, show off a "prom queen dress" she made with the help of her 13-year-old brother Ambrose, who works as a "volunteen" at the camp."She was really excited and told me all about how she was making her dress," Piper said.
The fashions were judged based on their use of recyclable materials and the winners were awarded trophies made from recycled materials that were filled with candy. Third-graders Haile Yocum and Maggie Franckhauser walked away as the winners for a prom dress they made using green, blue and yellow fabric scraps. She also wore gloves made from socks, in which they had cut holes for her fingers."I kinda messed up but it made it kinda cooler," said Haile about her gloves. It was evident the children enjoyed making the costumes, but when camp ends on Aug. 7 they'll also walk away knowing the importance of recycling. "I really like the idea that this was a recycling runway because recycling is important and it will save the earth and help the environment," Maggie said.
Posted by Joan Martin Fee No comments: 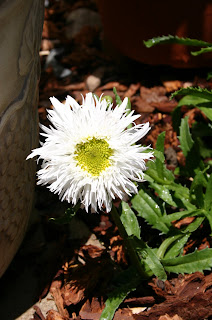 In celebration of my one year anniversary of moving to the coast, I invited a friend on a little road trip. We had lunch at one of my favorite restaurants along the ocean and then stopped at one of my favorite nurseries where I found this lovely fringed Shasta Daisy. I've been looking for them and here they appeared. A delightful day.

I had planned to spend some time reflecting on my last year and to see where I'd like my life to go over the next year, but it's been such a great year full of new friends and new things to experience that I didn't really feel the need to delve much deeper than that.

As for the next year, I'm working on that too through my volunteer work at COPE (Center for Obesity Prevention and Education) working with the team at Cal Poly and now at Univision to get the word out about the symposium and going full-steam ahead on my kids' book. Yes, life at the beach is amazing...